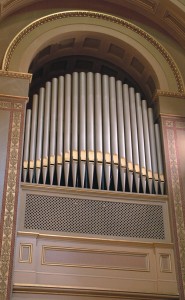 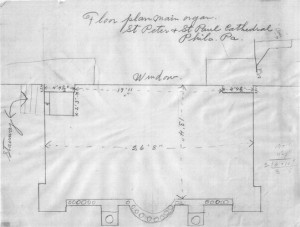 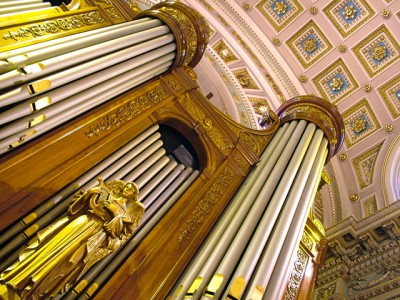 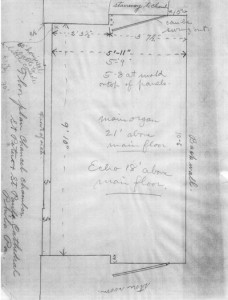 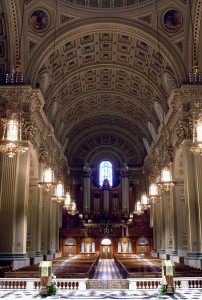 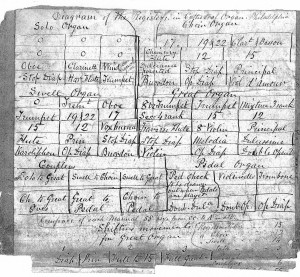 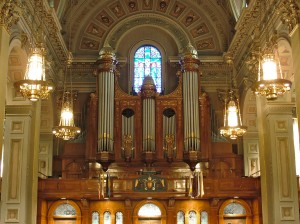 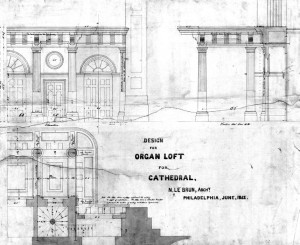 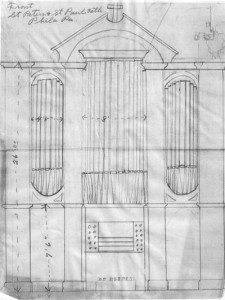 The Cathedral organ is one of the largest in the city of Philadelphia, having seventy-five ranks of pipes, ninety stops and 4,648 pipes on four manuals and pedals. The first pipe organ known to have been installed in the cathedral was built by John C.B. Standbridge in 1868 at a cost of $10,000.00. The Organ Dedication was on Wednesday, November 18, 1868. Participating Organists in the Concert were Mr. David Wood, Organist at St. Steven’s Church; Mr Henry G. Thunder, Organist at St. Augustine’s Church; Mr Hugh A Clarke, Organist at Holy Trinity; Mr William A Newland, Organist at St. Patrick’s Church; and Mr. Michael Hurley Cross, Organist of the Cathedral of SS Peter and Paul.  John C. B. Standbridge of Philadelphia began building organs in 1840 and quickly gained a reputation for building exceptional pipe organs in prominent churches in Philadelphia and the surrounding area.

The Standbridge Organ was replaced, except for the 16’ Subbass, which still plays today, by a new instrument, Opus 939, built by the Austin Organ Company of Hartford, Connecticut for a cost of $30,000.00 in 1920. The contract, signed by the Cathedral Rector Reverend Daniel Gercke, for the Austin Organ Opus 939 contained some interesting features.

In the 1957 renovations it was rebuilt by the Tellers Organ Company and a new console was installed. During these renovations the organ loft was expanded to provide more room for the choir, which had been established in the 1920’s.

During 1975-76 major renovations were completed on the organ in preparation for the 41st International Eucharistic Congress and the United States Bicentennial. In 1977 the Tellers console was replaced with a used Austin Console, originally built in 1922 for the Rochester Theatre.

Further restoration, undertaken in 1987, included the addition of the Trumpet en-chamade, situated on the ceiling of the organ case.  There was also a Chancel Organ installed of 11 ranks, built in the 1950’s by the M.P. Moller Company.

The famous Organ Case is constructed of carved walnut.  The richly ornamental screen is the design of Otto Eggers, who also designed the Jefferson Monument, the Mellon Art Gallery, and the National Gallery of Art in Washington, D.C.  The case enclosing the organ was most likely built by Edwin Forest Durang, one of the cathedral architects and builders.  The Organ Case was featured in all three editions of “The Contemporary American Organ” by William H. Barnes.   An inscription above organ referring to St. Paul’s election by God reads:  “Vas electionis est mihi iste, ut portet nomen meum coram gentibus.” (“He is a chosen instrument of mine to carry my name before the Gentiles.”) (Acts 9:15).

1868 Dedication Program from the John C. B. Standbridge Organ